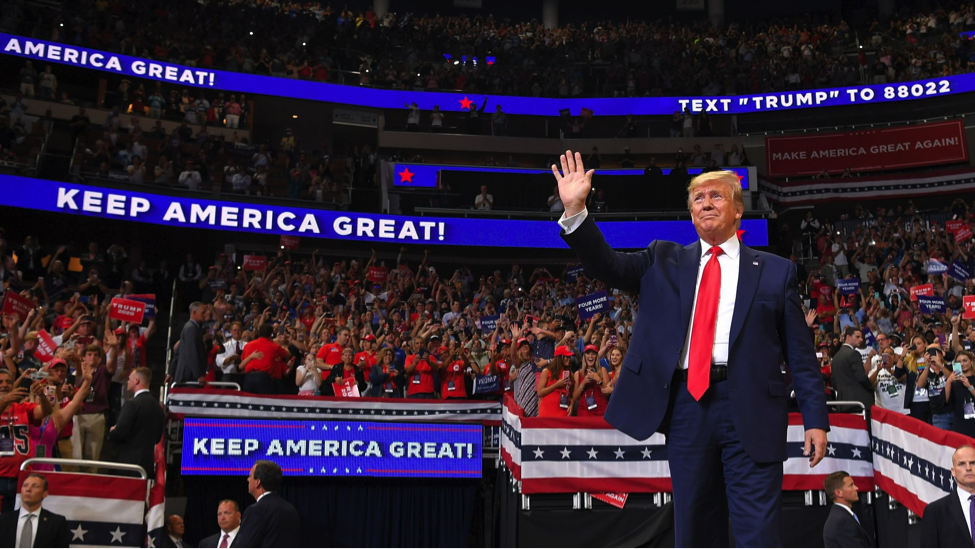 With well over a year before the 2020 Presidential Election, not many are willing to make predictions about the Democratic nominee – let alone about our next President Elect. However, based on our in-depth understanding of identity, populations, and societies, narrative and sentiment analysis, Social Listening tools, and years of experience working on national, state, and local elections across the globe, ENODO Global already knows the results of the upcoming election.

Barring any unforeseen black swan events, President Trump will be re-elected – and he owes it to the Democratic candidates.

Democratic candidates are doing anything they can to stand out. Their actions include far-fetched policies like free college, Medicare-for-All and a Green New Deal, promises of equality across race and gender, and even faulty appeals of genealogy from Beto O’Rourke and Elizabeth Warren. What’s worse, however, is that Democratic candidates have thus far refused to give President Trump or the current administration any credit for their achievements. They continually try to discredit and undermine the President and have built their campaign strategies on promises to tear down anything Trump has built, instead of trying to improve upon what’s working.

Despite constant attacks from the candidates and media, Trump’s approval ratings have remained steady around 40-45% throughout his presidency. They have even risen in recent weeks, which suggests there must be something the President is doing that the public likes. His aggressive position on immigration, support for the military, strong foreign policy, and undertones of nationalism and patriotism resonate positively with large segments of the population. This combined with a robust economy – record low unemployment, and a booming stock market – make him a formidable opponent.

Democratic candidates must face the facts: the majority of American citizens support Trump’s initiatives. They just want a more presidential, and less polarizing, figure in the White House.

ENODO’s Social Listening Platforms analyzed public sentiment of leading Democratic candidates over a 90-day period in key primary states Florida, Iowa, and New Hampshire. According to our analysis, a Biden-Harris ticket gives the Democrats the best chance of winning in 2020. Our analysis revealed the least amount of negative sentiment and the strongest rankings around these two candidates. Rankings are based on our candidate index—a calculation determined by candidates’ positive, negative, and neutral polarities, combined with their share of the voice.

Even a Biden-Harris team, the strongest team Democrats have thus far, can’t beat Trump in 2020.

Information from the platforms was used to produce Crowdsourced Dashboards that show democratic candidates’ messages just aren’t resonating with voters. In Florida, for example, voters express more negative sentiment than positive in their online conversations with four out of the five leading candidates. The candidates do a little better in Iowa, but most are plagued by negative sentiment and critical comments.

In order to win, Democratic candidates must design strategies built around listening to the topics and issues voters care about (e.g. healthcare, immigration, and the economy) instead of telling them what is important or how to think. An approach that puts citizens at the center of a campaign, enables campaign teams to build content that resonates positively with constituents, shapes public perceptions on key issues and trending topics, and mobilize voters.

Narrative and sentiment analysis support this new approach. These tools enable campaigns to discover common identities across different demographic groups and build broader ‘identity coalitions,’ that cut across traditional political divisions, such as race, ethnicity, and even political ideology. Appealing to diverse voters through common identities projects candidates as the type of politician voters are looking for: less polarizing and more unifying.

In 2019, campaign messaging must directly address the interests, concerns, and day-to-day experiences of voters, instead of vague ideologies and repeated attacks. Candidates must start giving credit where voters believe credit is due – even if that means acknowledging Trump’s accomplishments. If Democratic candidates want to surpass Trump in 2020, they need to start listening. Whether they choose to do so, however, remains unforeseen. Until then, ENODO remains confident: In 2020, Trump wins.