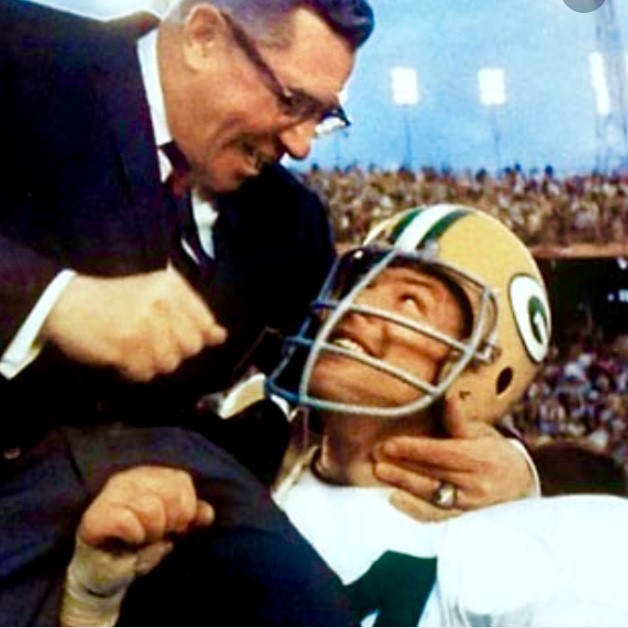 So I’m here at my Dad’s in the Villages, Florida. In his den, he points to a chair and says that is mine, while I’m here. We start watching some television on his giant big screen TV- the NFL Channel. The Hall of Fame Enshrinement is tonight. Of all the guys going in on this ballot, I notice one that has been a long time in coming. That is the HOF enshrinement of Jerry Kramer.

I read his book when I was a kid in the early 70s and I just reread it a couple years ago on iBooks- Instant Replay it is called. You want to talk about specific, individualized coaching- this guy, Kramer wore number 64 on the Green Bay Packers and played offensive guard. The same position his coach played when his coach played for Fordham Rams in the 1920s and was a member of the Seven Blocks of Granite. His coach was none other than Vince Lombardi.

The book is really a diary of the whole 1967 Packers season, which culminated in the team winning Superbowl #1. Lombardi is relentless on the whole team all the time but especially so on Kramer. Not only because they played the same position, but Lombardi knew how important the guard position was in his scheme of play. Both guards needed to block for their superb running back Golden Boy Paul Horning and protect their outstanding passer Bart Starr, for it all to work.

Lombardi never gives up on using every psychological ploy in the book on Kramer. He knew Kramer would process the information logically, turn it into motivation, and turn motivation into action. Also, Kramer would serve as a sort of moderator for the rest of the team. “Hell, if Kramer can put up with it, and do what he’s doing, so can I.” They played as a team and they won. They won big! Teamwork was the key- Lombardi knew it- Kramer and the team lived it. HOF is so long over due for Kramer, it’s great to see.

Interestingly enough, another guy going in on this ballot is Terrell Owens- a pure individualist. Great talent, out for himself. This is also on display as Terrell has elected not to attend the enshrinement. Instead, he has rented a stadium in Chattanooga, TN and will receive the honors there. Symbolic of how the nation has changed in the past 50 years on so many levels.

This blog was authored by Russell A. Lamattina