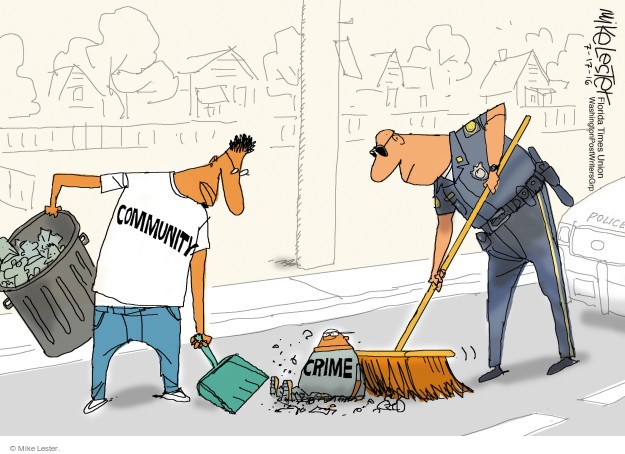 From Oakland to Baltimore, Violent crime and homicide rates continue to plague some of the largest cities across the United States. Failures by law enforcement and government leaders to address citizen security have prolonged community suffering, reinforced harmful stereotypes of both police and citizens, and fueled social movements and online protests like #BlackLivesMatter and #HandsUpDontShoot. Years of endemic poverty and ineffective policing programs have shaped the identities and behaviors of residents who no longer trust the police or public officials.

Some reports suggest a general decrease in urban crime and violence – the 21 Chicago residents shot this past Monday might beg to differ. Others tout improved community-police relations, citing community-police gatherings, parades, and other happy-go-lucky events. Despite these efforts, each week we continue to read about overly aggressive police tactics, often attributed to racial bias. This past week in Pittsburgh, a newly commissioned officer fatally shot a 17-year-old black teen as he fled a traffic stop, and in Minneapolis, police shot a 31-year-old black man who may or may not have had a weapon.

Both of these incidents, and many others like them, have caused outrage and have widened the divide between under-privileged communities and law enforcement. Police shootings lead to widespread protests and demonstrations, fueled by both local grievances and external forces. Protests and demonstrations are in turn met with police ambivalence or aggression, which only exacerbates tensions on both sides.

The problems plaguing U.S. cities are interrelated and cyclic. Police shootings are caused by poor policing techniques, broken community-police relations, and elevated social tensions, which cause high levels of violence. Police shootings, reinforce each of these issues – particularly when law enforcement responds badly to local grievances in the wake of a shooting.

Instead of listening and responding to the grievances of residents, which emerge most strongly in the aftermath of a police shooting, local officials try to bypass citizen engagement and solve policing problems by relying upon expensive, technologically-driven programs. Law enforcement and government officials announce plans for expensive and widely unpopular surveillance cameras projects like Chicago’s planned $95M Police Academy. They attempt to improve the situation by investing in gimmicky programs like the Newark PD’s feel-good ‘Trauma Training’, and high-tech yet completely unproven solutions like the Chicago PD’s ‘ShotSpotter System’ meant to curb shootings.

All the while, social tensions fester and local grievances go unaddressed. Citizens increasingly feel ignored and outraged that public funds, which could be used to improve their local communities, go to police forces they have lost faith in – forces that seem to hurt their communities, more than they help.

iPeople is a real-time, crowd-sourced, online interface that enables police and government officials to establish a virtual dialog with communities.  It gives citizens a “voice” to share crime related information, which enables police to visualize, measure, and track activities and events over time. iPeople information is used to continuously update the Dynamic Policing Model’s pillars to ensure that police activities address citizens’ needs and evolve based on changes within the environment.

Once citizens’ needs are addressed, and trust is restored between law enforcement and community members, the two groups are able to solve issues that go hand in hand: high rates of violent crime and police brutality. This approach enables law enforcement and government officials to enact high-level change and improve conditions at the community level, while changing behavior and restoring trust at the individual level as well.