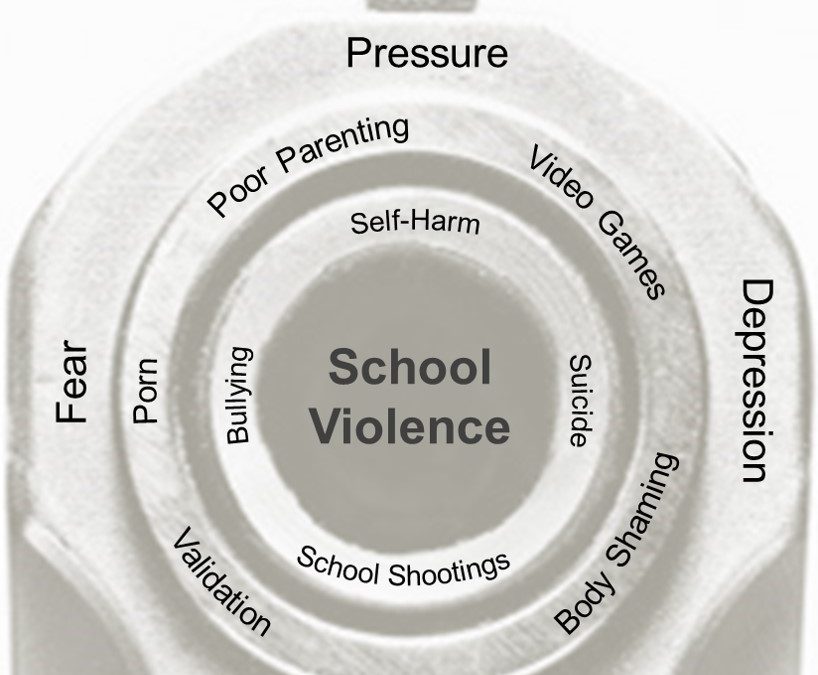 Over 400 young people have been shot in over 200 school shootings since the 2015 tragedy at Sandy Hook. Since the start of this year alone, there have been 23 school shootings – nearly one a week – in diverse communities across the country, from Noblesville, Indiana to Santa Fe, Texas to Parkland, Florida.

Rates of student suicide and self-harm are climbing across the country as well. According to the CDC, nearly one third of students report persistent feelings of sadness or hopelessness, and almost 20% seriously consider acting on those feelings. The suicide rate for school-aged girls has doubled since 2007, bringing the total number of student suicides to over 2,000 in 2015. Suicide is now the second leading cause of death amongst 15 to 24-year-olds, while homicide ranks third. The statistics are shocking – but what’s even more alarming is that no one truly understands the why behind the violence.

Many argue that guns are the problem and call for stronger regulation, while opponents believe that teachers should be armed. Others call for new and improved mental health initiatives, anti-bullying campaigns, and better emergency preparation. Initiatives include using gun violence-related lullabies to prepare preschoolers, installing multiple doors in classrooms for easier evacuation, and arming students with rocks for their own protection.

Recent initiatives to stop violence have proven ineffective. The truth is, the majority of “solutions” are reactive in nature. They do not attack the root cause of violence nor do they put a measurable dent in the number of shootings, suicides, or other forms of violence plaguing our youth. Schools need a comprehensive strategy and proactive approach that takes on school violence at its core – not an assembly of individual and ineffective solutions based on guesswork.

“Schools lack a reliable way to identify, monitor, and address student grievances — to prevent threats from manifesting into violence.”

Social media plays a significant role in fostering much of this violence. Cyber-bullying, online anonymity, and isolation increase tensions and empower individuals to act out in deadly ways. But in a world where killers like Parkland High School’s Nikolas Cruz and Santa Fe’s Dimitrios Pagourtzis upload videos and other online messages announcing their deadly plans, social media also provides us with a solution.

A number of states have already begun monitoring students’ social media accounts, scanning sites for signs of violence, bullying, and self-harm. Many of these techniques fail, however, because schools, states, and other organizations rely too heavily on technology alone. Without better cultural understanding and an identity-based perspective, stakeholders will remain unable to solve this innately human problem.

“Schools need a holistic approach that combines social media analysis and monitoring with a population-centric strategy that accounts for social, cultural, and identity-based factors.”

The key to preventing school violence lies in uncovering the “why” behind shootings, suicides and self-harm, by understanding the nuances of “Teen Culture” and “Teen Identity” and identifying the situational factors that trigger certain behaviors. By isolating specific situational variables (video games, explicit music, social media, bullying, body shaming, parenting, school pressures, etc.), measuring their impact on “Teen Identity,” and uncovering the potential of each to incite violence, we can begin to create a strategy that attacks school violence at its roots.

While more research is needed, addressing the issue of school violence through the lens of “Teen Identity” provides us a way to contextualize the problem, pinpoint its source, and track progress, which enables us to change unhealthy behaviors and mitigate violence. Once fully developed, this approach has the potential to prevent shootings, suicides, and self-harm from ever materializing, improve school safety and student satisfaction, and, most importantly, save lives.