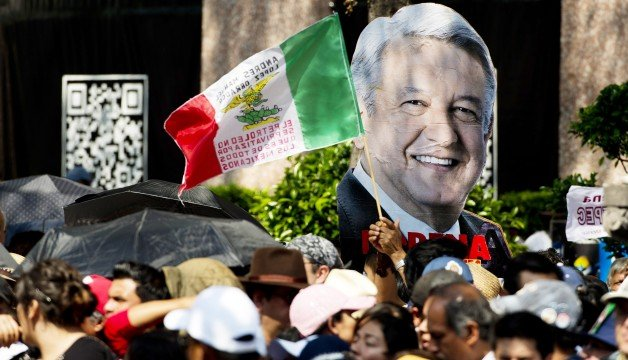 On July 1st, 2018, Mexican citizens will head to the polls. Expect chaos! Mexico’s last two Presidential elections were beset by irregularities, ballot tampering, and voter intimidation – and this one is unlikely to be much different. At stake is the presidency, the entire federal Senate and Chamber of Deputies, nine governorships, and hundreds of state and municipal seats. “In total, more than 3,000 elected positions are up for grabs, making the 2018 election unprecedented in its scope and impact on Mexico’s political landscape.”

Three months out, presidential candidate Andrés Manuel López Obrador holds a commanding lead over his two main rivals, Ricardo Anaya and José Antonio Meade. Recently, Citigroup strategist Julio Zamora argued that Andrés Obrador won’t win the Presidential election despite a commanding lead in the polls. Zamora argues that Google search trends, not voter intention polls, better predicted the last two Presidential elections in Mexico. Combined with the rising number of undecided voters, who represent 54% of the electorate according to a recent Buendía y Laredo poll and increased Google search momentum for Ricardo Anaya, the race to become Mexico’s next President is far from over.

“Despite Andrés Obrador’s double-digit lead, the battle to succeed President Peña Nieto is only just beginning.”

This will be Mr. Obrador’s third presidential election. Known as AMLO, Andrés Obrador’s coalition is comprised of his own leftist MORENA party, as well as Mexico’s Labor (PT) and Social Encounter Parties (PES). As a politician, Mr. Obrador goes wherever popular opinion takes him. In one breath, he’s anti-NAFTA, in another, he’s calling for a renegotiation of the treaty. On more than one occasion, he has favored popular policy over good policy. As mayor of Mexico City from 2000-2005, Mr. Obrador established a new public university, renovated downtown Mexico City, and built new highways. He also reduced corruption and created a special pension fund for the elderly.

“Dig deeper however, and you start to find cracks in Mr. Obrador’s achievements.”

His pension plan did not require future beneficiaries to contribute. Improved roads and bridges came at the expense of aging public transport and neither the police nor judiciary underwent significant modernization. Time and time again, AMLO has been an unremitting opponent of measures to modernize the economy. After the election of President Trump, Mr. Obrador traveled around the United States and called for the establishment of a “positive, constructive relationship with Washington… based on cooperation for development. When we work together, everyone wins.”

It is clear that Andrés Obrador is far from a perfect candidate, however, he benefits from 84 percent name recognition among Mexican voters, making him the most well-known candidate to date. Par for the course in Mexican politics, he also holds the highest negative response among voters. To win, Andrés Obrador will need to improve public sentiment, especially amongst women.

“Women, more than any other voting bloc, have the potential to influence the electoral outcome of the upcoming race.”

A study by Roy Campos for Consulta Mitofsky, found that in the 2015 elections, women voted significantly more than men, sometimes outvoting them by a margin of 10%. This does not bode well for Obrador, who saw women vote overwhelmingly against him in his last Presidential run back in 2012.

The 2018 FIFA World Cup, and the exceedingly politicized nature of soccer in Mexico, could also hinder Obrador’s chances of becoming president. Mexico plays its first three matches on June 17th, 23rd, and 27th. If Mexico makes a deep run in the tournament, voters overcome with feelings of national unity and patriotism, could reward Jose Meade and the incumbent PRI with an additional 1-2 percentage points of extra votes.

The central issues for most Mexican voters this election cycle revolve around combating crime (28%) and creating jobs (27%). The ways citizens view their own personal economic and security situations in particular have been the two most critical issues in Mexican elections since 2000.

“Having lost the presidency in 2006 by less than 250,00 votes, Andrés Obrador understands better than anyone, that every vote counts.”

At the same time, an onslaught of corruption scandals has brought trust in government to a historic low. President Peña Nieto’s party, the Institutional Revolutionary Party (PRI), which has governed Mexico for all but 12 years since 1917, has been widely criticized for its part in mounting corruption. Enraged voters may now opt to oust the PRI from power altogether and boost the number of votes for Obrador in the process.

Female voters and social media both promise to play key roles in electing Mexico’s next president. The election will also test Mexico’s democratic values and institutions. As election day approaches, there are troubling signs that Mexico’s National Electoral Institute is under significant stress. If Mr. Obrador maintains his lead in the polls, expect the worst. In both the 1988 and 2006 Presidential elections, rising opposition candidates lost, beset by irregularities, ballot tampering, and voter intimidation.

Despite these potential obstacles, Andrés Obrador has a good chance of winning. If Obrador can significantly improve his standing among women, no amount of election foolery will keep him from the Presidency. Mexican voters, especially women, are demanding change. On July 1st, they might just turn to Andrés Obrador to lead them in a new direction.