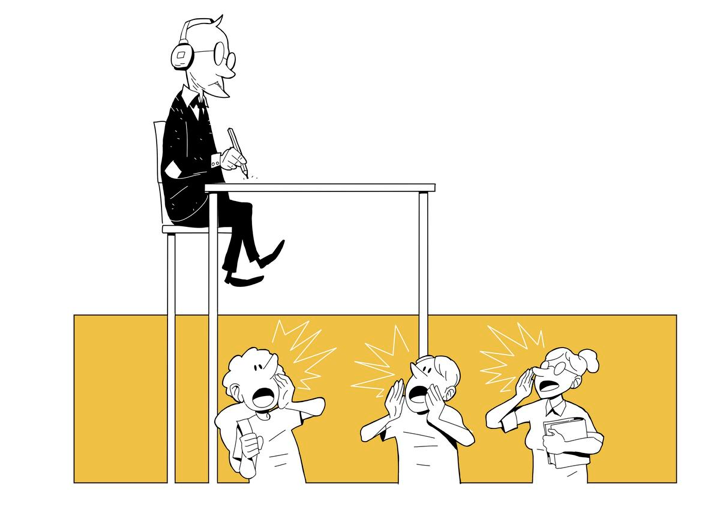 In our last blog about “Fake Experts” we examined “social influencers” who peddle their largely uninformed opinions as expert advice to thousands of followers for their own personal gain – often with serious consequences.

Now we’re taking on a more traditional brand of “experts” – academics, journalists, former politicians, and retired military officials. We assume these individuals have something special to offer, given their popularity, experiences and credentials. Some of these traditional experts do have real experience and knowledge, however, their advice is often accepted as though it is both unbiased and without error, which is a huge problem. We also believe, incorrectly, that these individuals are our best and brightest, when the truth is they are just well connected. Much of their stature simply comes from the access they have attained.

Take, for example, the revolving door of political appointees, lobbyists, consultants, and strategists. Federal employees are re-shuffled into private sector positions at various institutions with each partisan shift of the government. These positions simply provide a comfortable salary and a platform to leverage until the next election to attract enough attention to eventually be recycled back into the federal government.

The same is true of retired flag officers. After serving their 20-plus years and moving up the ranks, we for some reason think they are worthy of a high-salaried job in the private sector or public office. More often than not, they lack the experience and credentials to be successful in either. After losing his job at the CIA, due to his mishandling of classified information and extra marital affair, General Petraeus found a new home at the global investment firm KKR. Petraeus is the perfect example of someone without private sector expertise, given an advisory position solely based on the connections and influence he accumulated in his previous posts.

“They often become high profile consultants, gain senior positions in large corporations, join boards, and become the talking heads you see on TV or bigwigs in our elite institutions.”

Just like social influencers, traditional experts work hard to increase the number of followers and get their names in the media. That means much of what you read about them or hear them say is largely for ratings. Even when they have nothing new to say, which is often, they come up with something, no matter how insignificant, and then wrap it up and sell it to you as the best new idea out there. In the popularity contests of leading experts, it’s all about being “provocative” and “controversial,” even if the commentary lacks any real substance or real-life applicability.

The CEO of the consultancy Eurasia Group, Ian Bremmer, is notorious for this. His LinkedIn page is littered with daily, if not hourly, posts, including comics and GIFs, in an attempt to appeal to followers using whatever topic is “trending” that day. Leading journalists and editors are the same way. Due to their positions, they make all the choices about what is important news and what is not – but can we really trust them to find us important information and useful solutions? Not when they are shamelessly using their platforms to promote themselves.

Traditional experts sell ideas and ideologies, partisan solutions and, when it really comes down to it, themselves.

We shouldn’t trust “experts” to provide useful advice if they don’t understand us. In a recent episode of “The Ellen DeGeneres Show,” guest  billionaire Bill Gates’ failed  to name the prices of everyday household items, which was met by hysterical laughter from the audience. However, Gates’ inability to know the price of Tide Pods and Rice-A-Roni and his confession that it’s been “a very long time” since he’s been in a supermarket suggests a very real issue: experts are often totally out-of-touch with the lives and needs or ordinary citizens.

This is a huge problem – experts managing so much of our world aren’t even living in it. They live in ivory towers, isolated from reality. Politicians in Washington, celebrities who think they are politicians in Hollywood, and high profile athletes are constantly telling people what to think, assuming they know what’s best – even though more often than not,  they are out-of-touch with the lives of ordinary citizens.

“We assume they actually know more than us, even though they’re out touch with the lives of ordinary citizens.”

We’re beginning to see pushback to these “experts.” People are getting sick of self-serving, elites who tell them what to do and how to think. People are tired of the constant stream of senseless information used for self-promotion, political favors, and kickbacks. Traditional media is now referred to as “fake news.” The number of non-establishment candidates continues to rise as resentment against politicians increases and other elites, are being “ousted” from positions of power more and more frequently.

It’s time for “experts” to start thinking seriously about the advice they give. People in positions of authority aren’t always the brightest, and they don’t always know what’s best. They may simply be individuals with the access and resources to make people believe that their opinions are somehow legitimate.

It’s time for people to start looking elsewhere for information. Perhaps it’s time we find solutions from the people on-the-ground, who are getting their hands dirty, and who, more importantly, understand the lives and needs of fellow citizens. ENODO strives to be a company that does just that. We amplify the voices of ordinary people, rather than just pushing top-down advice as self-serving, out-of-touch “expertise.”