The Truth about Fake Experts 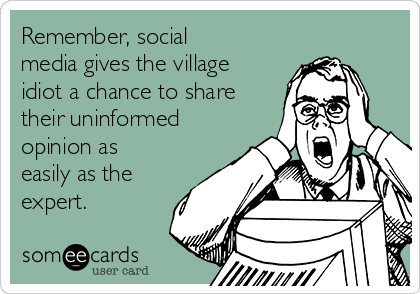 In the world of fake news and disinformation, everyone is a self-proclaimed expert. Popularity and self-promotion have replaced knowledge and experience as indicators of expertise. As a result, people peddle their personal opinions as expert advice in all areas, from foreign policy and finance to sports, beauty, and entertainment.

We can’t deny it: social media has made the fake news and disinformation problem significantly worse. Sites like LinkedIn, Facebook, YouTube, Instagram, and Twitter, are great at making voices heard – but lack a filter for distinguishing fact from fiction, and personal opinion from expert advice.

“Social influencers,” in the form of fitness gurus, lifestyle coaches, daily vloggers, and beauty, fashion, and travel bloggers, amongst others, tell followers what to eat and wear, how to exercise and apply makeup, where to go and stay, and more generally, how to live a certain lifestyle. And their advice is largely accepted, due to high follower counts, the enviable lives they portray, and, more often than not, sheer good looks.

“Fake experts have become entrenched in our social landscape.”

The vast majority lack formal education, training or comprehensive knowledge in their fields of expertise. Food bloggers, for example, rarely have culinary backgrounds – we just let them decide for us what foods to like and not like. Most travel bloggers have never worked a day in the industry – they are just good at taking vacation pictures. Fitness bloggers may have great physiques, but the majority certainly do not have the authority to be dolling out nutrition and workout advice.

Many of these people became “Insta-famous” overnight, without reason and without qualification, but we listen to their advice like it’s divinely inspired. They are neither journalists nor researchers; their posts are not the end product of detailed investigative work, but we trust them like it is – and that’s a huge mistake. Online “experts” aren’t giving us advice – they are making sales pitches. Their platforms are a source for income, where they make millions by selling us things that they got for free. The irony is, the more we take their “advice,” the more money they earn, free meals they get to eat, and complimentary hotels they are offered.

Did you buy that protein shake your favorite fitness personality claimed was life changing? That’s money in his pocket. Did you follow the world traveller with hundreds of scenic posts, probably uploaded straight from Google Images? She is using your follow to convince airlines and hotels to let her travel for free. And when you book the same hotel or use the travelers insurance she did? She’ll get 5% back from both your purchases.

Not every product or place these influencers endorse is “the best ever.” Yet thousands are still buying into it – sometimes with disastrous consequences. Last year, several online influencers and B-list celebrities teamed up to promote Fyre Festival, an exclusive music festival in the Bahamas. Followers spent thousands of dollars for tickets expecting a luxury affair, but instead arrived to disaster relief tents and pre-packaged meals.

Even fairly credible sites have had trouble distinguishing between false claims and expert advice. Last month news broke that highly trusted hotel and restaurant review and booking company, TripAdvisor, had been the subject of a scam. For nearly a week, the number one rated restaurant in London was the “Shed at Dulwich” – a restaurant that did not even exist and had made it to the top of TripAdvisor’s list only by creating a pretense of exclusivity and encouraging select influencers to write fake reviews. Several well-known professional food critics and celebrities were also supposedly tricked and repeatedly called to gain entry into the fictitious eatery.

No one was hurt by the “Shed at Dulwich” incident, nor left emotionally scarred like some Fyre Festival participants. Nevertheless, this case demonstrates the prevalence and power of disinformation. It illustrates how social influencers that offer personal opinions or flat-out lies as expert advice, and the extent to which their followers believe, and even act on, the faulty advice of these fake experts.

To be fair, social influencers would not have the ability to make the claims that they do, if we had not elevated them. But at this point, fake experts and failed expertise have become entrenched in our social landscape – and we have not yet developed a reliable way to manage it all. Until we do, a healthy dose of skepticism could go a long way, both in preventing the rise of more false experts and in lessening the damage from failed expertise. We would be prudent to remember that in a society where “experts” are a dime a dozen, their advice often does more harm than good.