A Forced Farewell: Why the UN Needs to Go 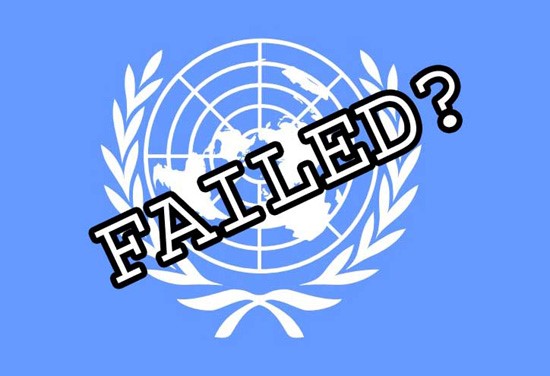 In his first speech to the United Nations, President Donald Trump castigated the organization’s “utter weakness and incompetence,” and argued the international body has failed to reach its potential. In his most recent statement, President Trump advised drastic reform to ‘make the UN great again’ – but it may be time to put an end to the United Nations once and for all.

The UN was constructed upon an idealist foundation that saw the Post-WWII order working as collaborative nation-states that would ultimately organize the world together. However, in reality, the cold, hard pragmatism of sovereignty is inherently at odds with such a notion—and we see the fall out every time one of the primary stake-holders makes a transgression that goes ignored. It has become an anemic organization that delivers empty promises, adheres to outdated norms, and continually fails to protect the most vulnerable populations. Moreover, the UN is bloated bureaucracy that is crippled by politicization, which lacks any enforcement mechanism, and costs billions of dollars annually.

The United Nations’ mandate includes enforcing international law and regulating international conflict, and it continually fails to do either. States powerful enough to ignore the UN do so frequently, and states small enough to be ignored do so as well. When states are caught in violation of international law, actions taken are completely discretionary, and more often than not, no action is taken at all.

Decisions are made only when one of the five permanent members is directly involved or has a stake in the outcome. Even when there is agreement within the Security Council, the UN still fails to deliver results because decisions, no matter how they are presented to the public, are the result of pragmatic national interest – not the idealist universal goodwill or international moral standard envisioned at its creation.

Despite universal agreement that North Korea is a threat to global security, the U.N.’s recently approved sanctions are extremely limited and will do nothing to stop the country’s nuclear program. All the UN has to offer is incremental economic sanctions even though it is granted the power to involve itself, even militarily, in the domestic affairs of any country that presents a “threat to international peace and security.”

The post-WWII nature of conflict has changed drastically. Interstate wars have been largely replaced by intrastate conflict, which the UN is ill equipped to manage and in fact, has a history of worsening (see Somalia, Rwanda, Darfur, Sri Lanka or the Former Yugoslavia). Out of respect for outdated norms that value state sovereignty over the lives of innocent civilians, the UN largely stays out of “domestic disputes” – even when those disputes become genocides that result in thousands of lives lost and millions displaced. Citizens in Yemen, Syria, and Myanmar can all attest to the fatal consequences of the UN’s inability, or unwillingness, to adapt to changes in the international sphere.

The UN’s consistent failure to act makes the organization complicit in atrocities ongoing around the world – a fact that has not gone unnoticed. The Human Rights Commissioner recently criticized the UN for its failure to investigate human rights violations in the conflict in Yemen, which has raged on with Saudi support since 2015, and killed at least 5,144 civilians to date. Regarding the abuses in Yemen, Commissioner Zeid Ra’ad Al Hussein admitted the international community, and the UN in particular, is “contributing to the continuing horror.”

This past summer, Carla Del Ponte, an international war crimes expert, quit the UN Syria inquiry because it “does absolutely nothing.” In her final rebuke, she stated: “I am quitting this commission, which is not backed by any political will. I have no power as long as the [UN] Security Council does nothing.” Last month, Zeid Ra’ad Al Hussein, the U.N. High Commissioner for Human Rights, admitted there are “possible crimes against humanity” occurring in Venezuela, pointing to the government’s use of criminal prosecution, arbitrary detentions, excessive use of force, ill-treatment of detainees, and torture.

The UN has limited enforcement mechanisms; it lacks a standing army and the ability to organize and effectively oversee military operations. Decisions are heavily politicized and bureaucratic red tape prevents the organization from acting quickly in the instances when immediate action is necessary. But what’s worse is that the UN is a completely reactionary, discretionary body, which respects outdated norms that privilege states over citizens. It continues to rely on traditional geopolitical approaches that are too little, too late, rather than proactive, population-centric approaches, from targeted aid and investment to culturally attuned policies and engagement strategies, which could actually make a difference.

Universal application of institutional options limits enforcement, which plagues the organization with inaction and enables powerful states to use supranational mandates as a thin veil over impunity. Failure to impose a standard for action will only ensure that the Security Council will function as a venue where the post-WWII order is contested and defined by permanent members while citizens of the world continue to suffer preventable outcomes.

Love him or hate him, President Trump said it best: For the UN, it’s time to “focus more on people, less on bureaucracy,” or just walk away, before more innocent lives are lost.