The Kingdom of Bhutan is currently caught in a crisis between its two powerful neighbors, China and India, over the Doklam plateau. As each country tries to assert its supremacy over the other, Indian and Chinese propaganda machines have dominated the conversation, nearly drowning out the Bhutanese narrative throughout the crisis. However, the widespread use of social media and the constant flow of online information have amplified the voice of the Bhutanese people, giving them the ability to reshape the course and outcome of the conflict.

Bhutan’s youth see social media as the voice of its generation, which is why internet penetration in Bhutan is up by 292% since 2010.

Social media platforms (e.g., Twitter, Facebook, Blogs, YouTube) serve as virtual public forums that shape people’s perceptions concerning trending topics and important events. Unlike public protests that are limited by a physical location, protests on social media proliferate instantaneously across social, political, and informational environments and are not constrained by geographic boundaries. Online protests have a disruptive compounding effect, which heightens existing Social Risk factors that reside within populations and consequently increases the likelihood of instability.

India’s and China’s unrelenting media war over Bhutan, is constantly disseminating and immediately responding to one another’s videos, political cartoons, magazine covers and traditional print news. A recent India Today magazine cover featured a Chinese map portrayed as a chicken (without Tibet) and Pakistan as a smaller chick. This produced an immediate reaction from Chinese print media that quickly countered with an image of an Indian map (including Bhutan) filled with the Chinese flag.  Moreover, just two days after India’s Independence Day, Chinese owned Xinhua News released a video mocking Indian policy over Bhutan.

Online protestors within Bhutan are now using Twitter and Facebook to re-post and criticize these videos and cartoons. They are gathering thousands of responses from users who were otherwise unaware of the extent of the print media war nor the way their country has been portrayed by Indian and Chinese media throughout the standoff.

Moreover, seemingly unrelated events have also impacted the crisis by triggering individual or group identities, which produce visceral, emotional responses. Seconds after Indian boxing champion Vijender Singh forfeited his title for peace in Doklam, thousands of Twitter users from India to the U.K. used hashtags #IndiaProud and #BattleGroundAsia to cheer Vijender Singh’s decision. Within 24 hours of his announcement, thousands of Twitter streams from across the world converged into a powerful torrent of online protests naming Vijender as the heroic face of India’s defiance of China’s incursion into Bhutan.

Future propaganda, news media, and events, even with only the slightest connection to this conflict, will continue to shape public perception and strengthen Bhutanese identities, which appeal to the Bhutanese sense of nationalism and exacerbate Bhutanese fears over a potential war. Bhutanese online mobilization around shared beliefs about and concerns over both the media’s depiction of the crisis, as well as the crisis itself, produce even greater challenges to existing statecraft and traditional geopolitical maneuvering by involved governments. 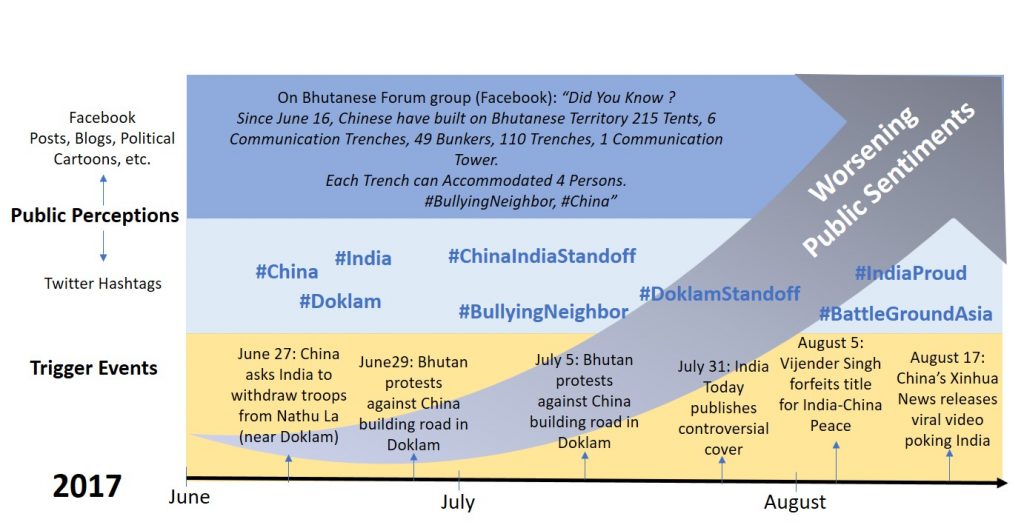 Real-time social media analysis delivers a more nuanced interpretation of the Doklam dispute and serves as a powerful conflict resolution tool for all stakeholders in the crisis. This includes not only the Chinese, Indian, and Bhutanese governments, but also their populations – specifically, the people of Bhutan whom the crisis impacts most directly. By harnessing the power of social media, the Government of Bhutan can identify, monitor and shape the sentiment of its citizens and create a national strategy around Social Risk resilience. Doing so will help the nation manage geopolitical shocks from its larger, more powerful neighbors and to develop strongly-backed initiatives to forge its own way forward.