Ousted Elites: Heightened Social Risk and Instability at the Top 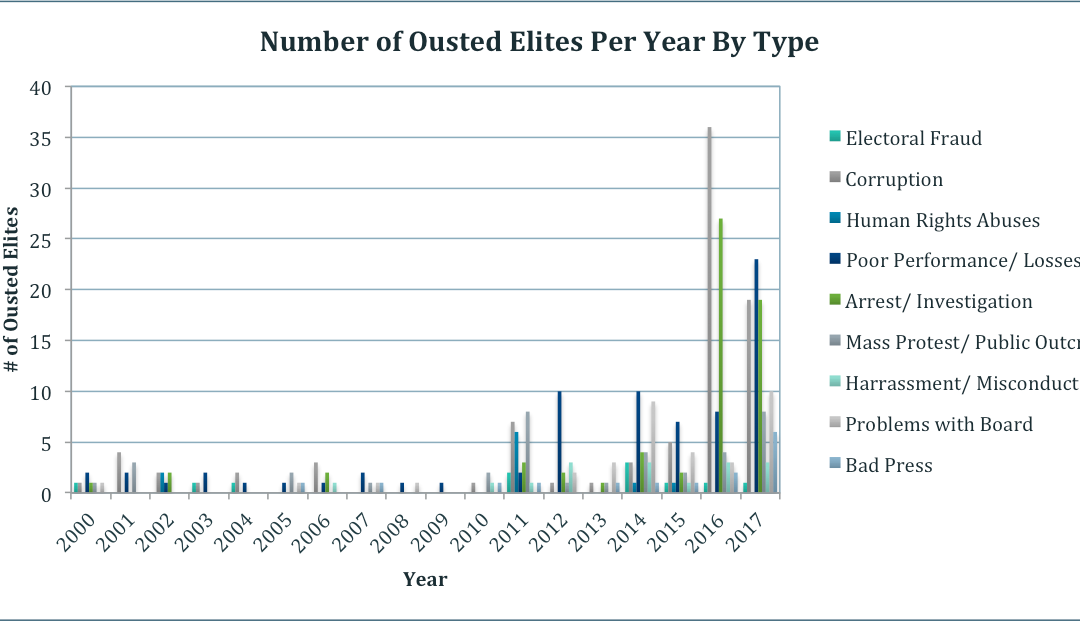 Pakistan’s Prime Minister Nawaz Sharif, Japan’s Minister of Defense Tomomi Inada, and Macau billionaire Ng lap Seng were each charged with or convicted of crimes and forced from office all on the same day.

This reflects a growing trend: political and business leaders are being ousted from positions of authority at an alarming rate. The removal of presidents, prime ministers, and top executives is the result of rapidly evolving demographics, shifting cultural attitudes, and social media, which is now rooted in transparency and accountability. This growing trend will only escalate as heightened Social Risk factors increase instability through amplified population grievances and collective action, creating not only job insecurity for top leaders, but also unpredictability and volatility throughout societies across the globe.

ENODO Global, a risk management firm that specializes in social risk, recently examined over 200 political and business leaders who have been ousted from office since 2000. In the past five years, the number of leaders who have been impeached, terminated or forced to resign has significantly increased, spiking dramatically in the last two (see Figure 1). This growing trend is only starting to be realized and still not fully understood. In July, the Wall Street Journal published an article on “Endangered CEOs,” naming thirteen major companies who have installed new chief executives since the start of 2017. ENODO identified 37 additional top business leaders dismissed in the past six months by corporations like Ford, Samsung, and USA Gymnastics. Removals are often attributed to turnover, activist investors and industry upheaval, however recent removals can be attributed to a combination of Social Risk factors.

It’s not just CEOs who are endangered. Since 2000, at least 54 presidents or prime ministers have been forcibly removed from office. Some of the most notorious examples include: the President of Guatemala Otto Fernando Pérez Molina, ousted over popular protests related to corruption charges; Icelandic Prime Minister Sigmundur David Gunnlaugsson, forced to step down amid the Panama Papers scandal; and countless Brazilian officials, including Presidents Dilma Rousseff and Luiz Inácio Lula da Silva, on corruption related issues. Additional protests, probes or investigations meant to remove heads of state are ongoing in at least eight different countries, including Serbia, Venezuela and Zimbabwe. 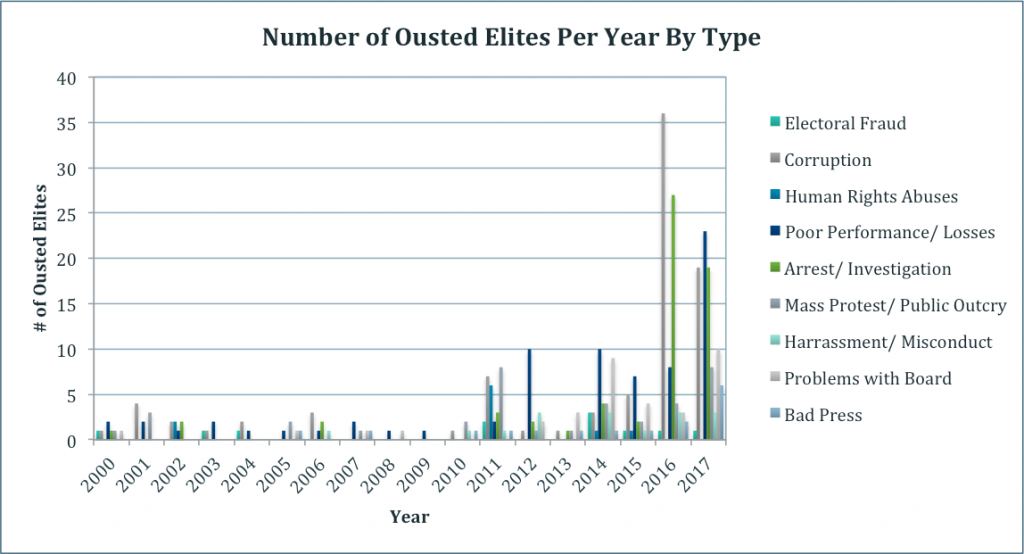 Such a pervasive trend, across distinct governments and industries, cannot be ignored or attributed to a single factor. Many political and business leaders have come under intense public scrutiny, faced scandals and even federal investigations. Leaders have otherwise failed to understand the populations they serve, leading to criticism, indifference, unpopularity and a drop in public support or market sales. Activist investors, industry upheaval, company losses, negative press or public outcry are only symptoms of broader social changes and widespread discontent. Regardless of the immediate cause of  removal, each one has, in one way or another succumbed to Social Risk – failed to understand and manage the current climate, in which populations have far greater influence than ever before.

In the past, political and business elites were able to maintain order and stability through their business agreements, patronage systems, and control over security forces—police and military. Political elites controlled security forces to safeguard the interests and investments of business executives who spent millions cultivating and maintaining relationships with political leaders. Military leaders received direct benefits in the form of kickbacks, promotions, or a piece of the action. For decades, this lucrative, mutually beneficial relationship between the groups proved effective in safeguarding investments and maintaining the status quo. 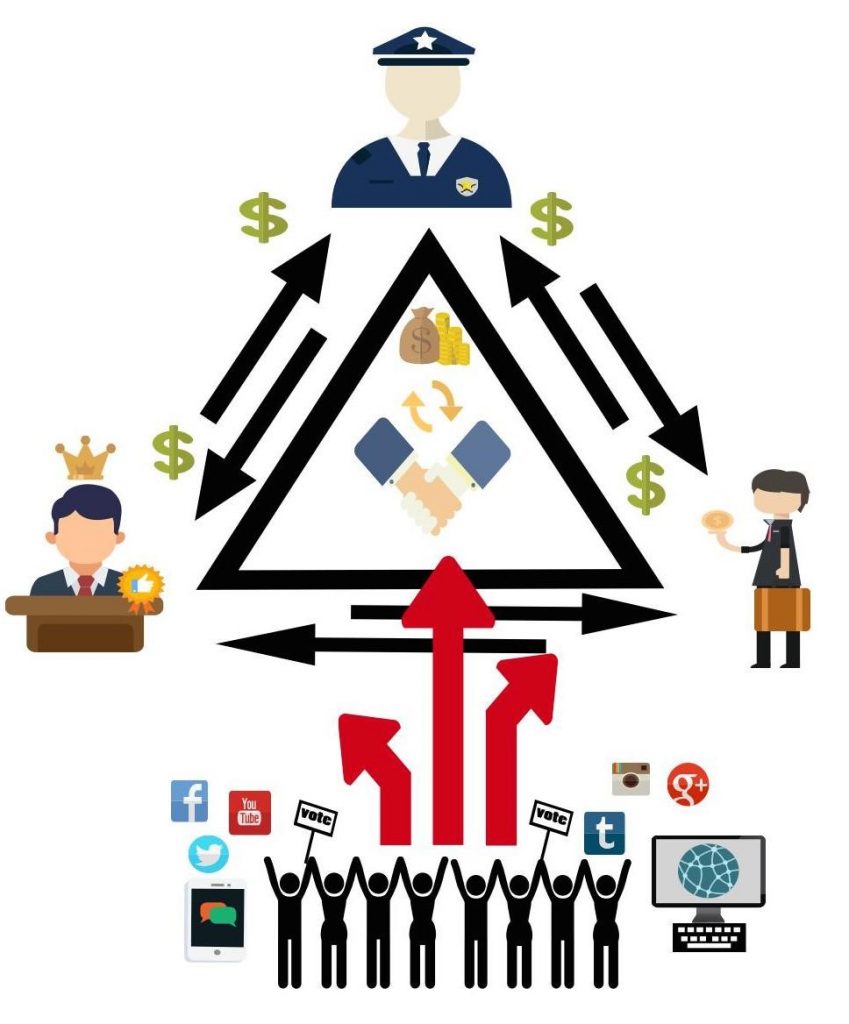 Populations, on the other hand, were left out of the equation. They were largely ignored – assumed ignorant, easily manipulated, and repressed by government’s use of security forces and control over information. Before the proliferation of social media, people were not considered a threat to the ruling class. Political and business leaders were rarely held accountable. Their decisions could be self-serving, because the people they were meant to serve were kept in the dark, oblivious to elites’ activities and increasing inequalities. This lack of transparency fostered an environment prone to corruption and nepotism, wherein exploited populations lacked not only knowledge of misconduct, but the mechanisms needed to question it as well.

Now, however, shifting cultural attitudes, demographic changes and technological developments are beginning to change that. We are in the midst of an “Accountability Revolution.” No longer will people be left in the dark as political and business elites make deals in smoke-filled rooms. Populations are demanding greater influence, transparency and accountability from governments and corporations. People are more aware of ethical lapses, corruption issues and impunity concerning CEOs and government officials. They’re infuriated by decades of marginalization and they’re breaking down barriers — challenging traditional hierarchies and ousting elites along the way.

Around the globe, protests are calling for anti-corruption probes and task forces to take down self-serving industry and government leaders. Protests are erupting almost daily in countries like the Dominican Republic, Guatemala, Romania, Morocco and Russia, to name a few. Citizens feel betrayed by authorities that have taken advantage of their positions and abused their power for decades without consequence. This theme is prominent in anti-corruption protests throughout Latin America, and specifically in Guatemala, where protesters march with banners displaying a powerful slogan: “They stole so much, they stole our fear.”

The documents leaked in the Panama Papers shocked the world – but they shouldn’t have. Investigations into the exorbitant wealth of leaders are now commonplace. According to ENODO’s analysis, corruption or allegations of corruption are the leading cause of forced removals of government officials. Since the start of 2017, China is said to have punished 210,000 corrupt officials, Italian courts convicted forty politicians and businessmen for corruption schemes, and the Vice President of Equatorial Guinea has been criticized, convicted and jailed for spending state money to bolster his own extravagant lifestyle. The former governor of Veracruz, Mexico, Javier Duarte, was recently charged with corruption, money laundering and organized crime – and in an ultimate triumph of justice, the lavish goods seized from his home were auctioned off and the proceeds were used to build a children’s hospital.

Leading the charge against self-serving elites is the millennial generation. Millennials hold a vastly different worldview from generations before them. They expect the government to take an active role in improving society and see the protection of human rights and dignity as imperative. Millennials are notoriously confident, expressive and liberal and, due to a growing youth bulge and widespread population growth, they’re overeducated, underemployed and indebted. Liberal ideologies, general disillusionment and excessive time on their hands makes them more likely to adopt radical views and challenge the status quo — and the elites that maintain it.

This new generation grew up in the era of globalization, with unprecedented access to information and potential for cross-continent communication at their fingertips. As the most technologically connected generation, they are able to leverage online platforms to coordinate decentralized protests, as they did during the Arab Spring, Latin American student mobilizations, Occupy Wall Street protests, and India’s ongoing agrarian crisis. With one hand on the tractor wheel and the other on the phone ready to tweet, young Indian farmers expressed grievances and mobilized their peers without a centralized power structure to coordinate activities, demonstrating just how universal these online platforms have become.

The millennial generation is also positioned to transform the global economy. They are socially conscious shoppers who spend differently than those before them. Millennial’s make charitable companies like Toms, Stella Artois, or Starbucks, who give back to society, be it through free shoes, water bottles or education programs, extremely popular. They also punish companies that fail to align with their beliefs or contribute to society. As Ex-Uber CEO Travis Kalanick, ex-Mozilla CEO Brendan Eich, and Pepsi’s marketing team know all too well, marketing missteps or even personal beliefs, especially those out of line with a progressive agenda, can be detrimental to company branding, performance and are likely to lead to lost jobs at the highest level.

Social media, which is now anchored in democracy, provides a critical platform for social change. It not only increases awareness of inequality and makes economic and political processes more transparent, it gives people a voice. It allows them to disseminate ideas among and beyond their immediate social groups, create movements, and mobilize segments of societies through the power of common beliefs and grievances, which transcend ethnic, racial and religious differences. Millennials have learned hard lessons from previous generations and are well-equipped to stand up against social injustices and to topple elites, through petitions, boycotts, organized revolts and even a trending hashtag.

Corruption, impunity and inequality are no longer tolerated. They are met with harsh pushback from online and in-person protests. They are no longer seen as unfortunate societal misfortunes, but as an attack on individual dignity and human rights and as an abuse of power. Corruption, specifically, impedes economic and social development and presents the greatest threat to stability in the modern world. It fuels citizen grievances and pits them against political and business leaders, setting the stage for unrest and violence.

In many ways, modern democracies are failing. People no longer feel represented by the individuals they elect or the government institutions meant to serve them. They perceive leaders as corrupt and self-serving. Institutions appear to work only for a select few rather than for the greater good — political and economic elites protect their own interests and investments at the expense of everyone else. So rather than trying to create change through traditional electoral means, citizens are heading straight to social media feeds and the streets to make their voices heard.

In this dynamic environment, old tools and approaches are ineffective. Traditional analysis continues to misdiagnose or ignore completely the growing discontent of populations, which only fuels the divide between ruling elites and ordinary citizens. When populations are misunderstood and their grievances go unaddressed, governments and businesses fail and the ruling elites are ousted. In the most extreme cases, people lose faith in government institutions and rule of law, democratic or otherwise, and anarchy unfolds.

Venezuela is in the midst of such a process. Anti-government protests against Maduro’s “democratic” regime have turned violent. The Venezuelan government is failing to provide basic goods and services for its people, who are now facing off against armed forces on city streets. It is a country on the brink of collapse and a situation that should serve as a warning to those who dismiss the seriousness of Social Risk or fail to adopt a population-centric approach, and instead cling to outdated forms of risk management.

Social Risk has increased significantly in recent years, leaving a wake of ousted elites in its path. Political and business leaders who ignore the trends and continue to rely on personal relationships and their patronage networks will soon join the ranks of other fallen leaders who have failed to understand and manage heightened Social Risk in today’s dynamic social environments. They must learn quickly to address population grievances, shape public perception and rebuild trust. Stability is no longer about balancing relations with other elites; ordinary citizens are now part of the equation and pose the greatest threat to the status quo. Populations have not only gained a voice in political and business affairs – they’re leading the discussion.