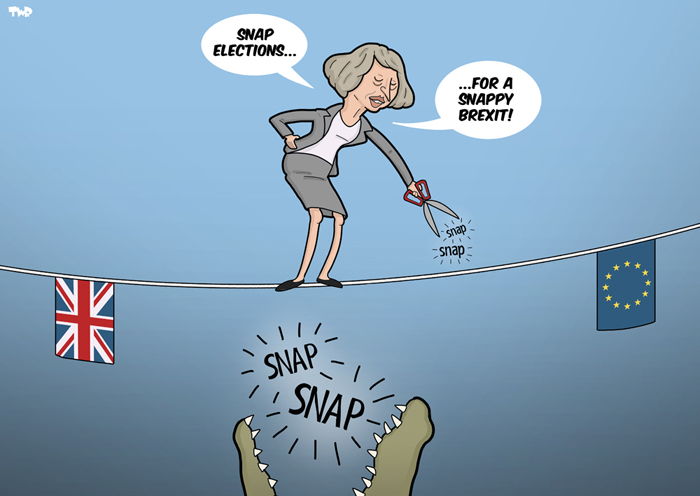 May is wrong to believe that Conservatives will sweep the UK general election because she does not understand the power behind emotionally charged issues central to the electorate’s identities. Like her predecessor David Cameron, May will witness first-hand the growing divide between politicians and constituents.

Prime Minister Theresa May was wrong to call a snap election. May believes support for Brexit will equate to election success for the Conservative Party. She is mistaken: Brexit will not be the primary issue in the upcoming UK elections. The growing millennial voting block prioritizes emotionally charged issues that speak directly to their identities. Events that impact people’s daily lives like the Manchester bombing will drive decision-making at the polls.

Voter demographics and social dynamics evolve rapidly in today’s world. For example, 1.2 million new millennial voters have registered and half are under 24. This demographic group has historically not voted for the Conservative Party.  The more powerful evidence, however, is why they registered. Social media campaigns, including one conducted by famous Grime artists such as Stormzy and JME, urged young people to register to vote to ensure a win for the Labour Party. The strategy was overwhelmingly successful due to the amount of retweets and comments for each twitter post. Many young people even tweeted back to these popular rap stars, citing their decision to register and vote as “thanks to JME and Stomzy”.

Dramatic changes in the British electorates’ perceptions and demographics since the Brexit vote may prove polling organizations that forecast a Conservative Party victory incorrect once again. Pollsters and politicians need to understand the impact these new voters will have on upcoming and future elections. The key is identity. Identity explains why people believe what they do, how varying demographic groups will behave, and ultimately impacts on voting.

To connect with young voters, the Conservative Party needs to understand why many young voters do not align with their policies or mandates. The evidence is discoverable and publicly available, but often goes unheard. Millennials continually voice their frustrations through social media platforms:

The gap between young voters and the Conservative Party is deeper than just Brexit. It is a result of the literal disconnect between the identities of each group. Millennials feel personally attacked by the Conservative party’s actions that threaten government agencies and the party’s perceived connection to the wealthy. This angers young voters, who are increasingly part of, or align with, the views of the middle class. If the Conservative party wants to win and maintain its seats in parliament, it needs to design programs and narratives that establish a framework for an enduring relationship with millennials.

A population-centric approach applied to political campaigns uncovers the identities that shape different demographic groups’ perceptions, beliefs, and more importantly voting behavior. It focuses on the issues that impact individuals daily, so politicians can effectively manage catastrophic events like the Manchester bombing. By understanding the core values that shape perceptions across varying demographic groups (e.g., race, religion, gender, and ethnicity) politicians have the ability to effectively communicate to their constituents in a consistent manor, reinforce the core message of their campaign, and shape the electorates’ perceptions on important topics and key policies. Doing so can transform the current perception of “disconnected elite politician” to “understanding public servant” and influence political decisions and election results.