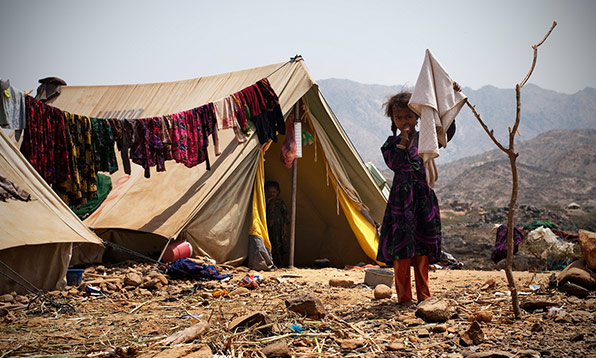 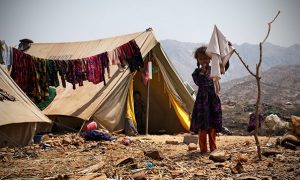 Depending on what reports you read, the country is either Afghanistan on the sea or the next Somalia, or both. –Ishaan Tharoor

The latest terrorist attacks by ISIS in Paris and Mali have drawn the world’s attention away from a growing humanitarian crisis responsible for the deaths of thousands. It has been eight months since the Saudi Arabian-led coalition, codenamed Operation Decisive Storm, invaded Yemen to oust Houthi rebels from Sanaa. The blitzkrieg invasion has stalled with the Saudi and UAE militaries now caught in a quagmire similar to those experienced by the U.S. in both Iraq and Afghanistan. Diplomatic efforts have been ineffective and only exacerbate tensions on all sides. If not addressed Yemen’s humanitarian crisis will increase in magnitude, further stress diminishing international aid, and ultimately intensify the paralyzing refugee catastrophe.

Yemen’s contemporary challenges are complex due to its history, politics, geography, and regional influences. The lack of a legitimate central government, national identity, and infrastructure to support economic development create deep political, economic, and ethnic fissures. According to pre-Arab Spring estimates, the Yemeni government provided electricity to only 42% of its population, security and legal services to 35%, water for 26%, and proper sanitation to a mere 16%. These figures do not account for events since the invasion, which have significantly degraded Yemen’s infrastructure and hindered delivery of basic goods and services.

More than 300,000 people have been displaced by the fighting, and approximately 80% of Yemen’s 20 million people are in dire need of food, water, and medical aid. The Saudi campaign has been labeled a “humanitarian disaster” and come under intense scrutiny from Amnesty International, United Nations bodies, and Human Rights Watch. Incidents like the August raid on the Houthi-controlled Hodeida sea port and destruction of a Medecins san Frontieres (MSF) facility in Saada highlight the negative effects of coalition strikes on the population. Inquiries into potential war crimes are already being proposed as a result of the estimated 2,600 civilian casualties, including the deaths of hundreds of women and children.

The greatest problem with Yemen is that it has never been about Yemen. Yemen continues to experience the same phenomenon with regards to foreign influence. Whether the Ottoman’s land grab for the glory of empire, the British desire to secure a path to India vis-à-vis Aden, or the Saudi agenda to curb Shi’a (Iranian) influence, it has always been the stepping stone to another objective. This trend continues in Yemen today.
U.S. foreign policy is torn between supporting its Gulf allies, curbing a burgeoning humanitarian catastrophe, and combating al-Qaeda in the Arabian Peninsula (AQAP). The Obama administration is providing logistic, intelligence, and targeting support to the Gulf coalition; while the Saudis continue to run the same U.S. interventionist playbook that brought failure to Iraq and Afghanistan.
Syria, Iraq, Libya, and Afghanistan provide stark examples how military operations proliferate civil unrest, reinforce negative beliefs, and dramatically influence regional and international dynamics. Forgotten at the center of these conflicts are the people whose lives, families, communities, and societies are torn apart by external forces. With each air strike and civilian causality, fear and hatred within a society grows. Feelings of revenge manifest into violence with generational implications. As demonstrated in the above campaigns, foreign intervention has little record of success and ultimately, has caused more harm than good.

AQAP and ISIS prey upon fear and anxiety within Yemen’s populace. They exploit ethnic, sectarian, and economic fissures to create footholds by delivering governance, rule of law, and basic needs where they do not exist. Moreover, they apply a sophisticated, long-term, population-centric strategy that is delivered through actions and reinforced through narratives. While the Saudis force a failing U.S. interventionist strategy, ISIS and AQAP apply proven methods to expand their influence. AQAP has thrived in Yemen’s chaos for years and more recently, ISIS has zeroed in on Yemen to expand its regional influence. An article in the latest issue of Dabiq, “The Allies of Al-Qaeda in Yemen,” discusses the Sons of Hadramawt, the new name used by the Yemeni branch of al-Qā’idah. And according to the AEI Critical Threats Project, ISIS now operates in at least eight governorates.

Demand for limited resources amplify historical and contemporary grievances across political, sectarian, and tribal divides, create opportunities for al-Qaeda and ISIS to expand their influence, and have propelled the population into an exodus of forced migration. Political and military solutions will not end the conflict or deliver peace and enduring stability. Peace will only be achieved when Yemen’s population is secure and various ethnic, tribal, and political groups coalesce around a single objective, reinforced by a powerful narrative. These objectives, however, are not possible without stability.

At the crux of Yemeni instability is its humanitarian crisis. Stability in Yemen will begin when individuals and communities—the foundation of modern societies—have their basic needs satisfied and feel secure. Diplomats, politicians, military planners, and development experts must develop a framework to mitigate the growing humanitarian crisis, deliver a viable alternative to current military and diplomatic efforts, and create the foundation for enduring peace in Yemen and the region. This requires external actors to adopt a population-centric approach that creates an environment amenable to representational government and economic development. A population-centric strategy delivers an effective solution that provides immediate relief and sustained benefit to individuals and communities across Yemen’s diverse population.

This blog was co-authored with Ms. Stephanie Brown; a graduate of The Fletcher School of Law & Diplomacy, with a Master’s in International Security and Leadership Studies. She is currently a senior analyst at ENODO Global and has recently been accepted to the United States Navy’s intelligence program.