Conflict Analysis: A Paradigm Shift to a Population-Centric Strategy 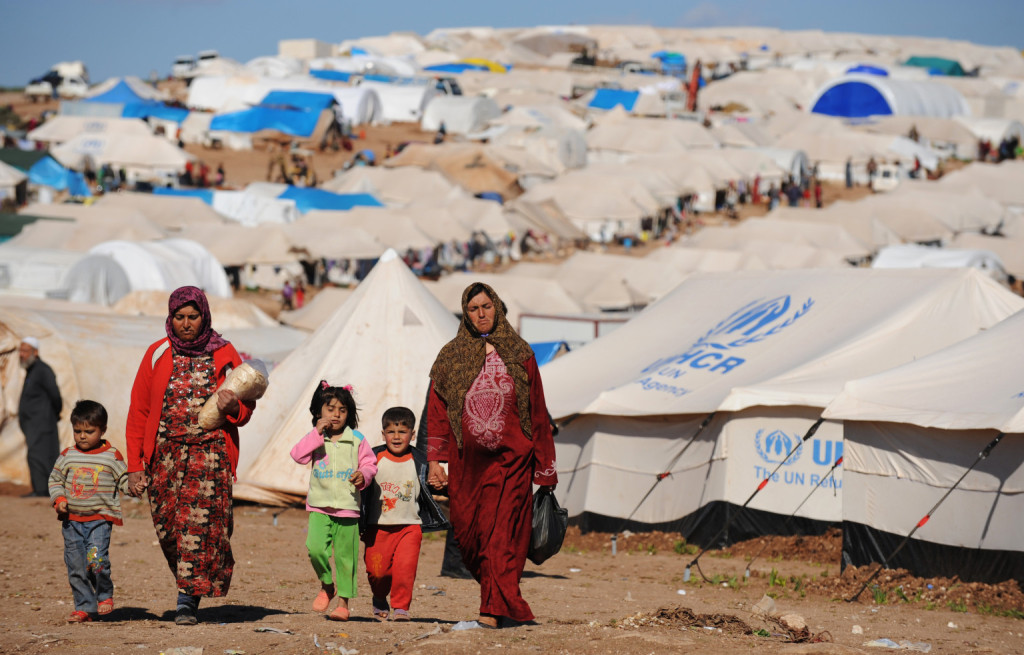 Ongoing conflicts across the globe are having catastrophic social, economic and political consequences that are not often realized and underpin a growing cycle of insecurity. A 2014 United Nations (UN) report puts the number of people displaced by war, conflict or persecution at a record high of nearly 60 million around the world. Additionally, the 2015 Global Peace Index estimates that in 2014 global conflicts killed 180,000 people and cost $14.3tn, which is equivalent to 13.4% of the world’s GDP. And global security trends continues to worsen. There has been a dramatic increase in the number of local and regional conflicts in the past five years. Fifteen conflicts have erupted or reignited, including eight in Africa and three in the Middle East. If not addressed, the number of conflicts will continue to escalate and cause greater demands for resources, which is not sustainable.

“The World is a Mess” and “It’s no longer possible to can clean up the mess. We have no capacities to pick up the pieces.” UN refugee agency (UNHCR) head Antonio Guterres

One of the most severe but often over-looked consequences of these conflicts are the psychological effects. Fear, distrust, and hatred generated by continual conflict are immeasurable, influence various segments of societies and often times buttress existing negative beliefs. But the greatest psychological threats will be experienced in the next generation, namely by children. Entire generations of children world-wide are growing up experiencing the destructive effects of war. Of the 19.5 million refugees in 2014 more than 50% were children. In extreme cases, children in conflict areas are often conscripted to fight and indoctrinated into radical ideologies, which shape their beliefs and those of future generations. For example, in the Democratic Republic of the Congo, the United Nations Organization Stabilization Mission documented the recruitment of 996 children over a 20-month period in 2012-2013. Negative psychological effects of war erode the moral fiber of individuals, intensify sectarian divides and amplify existing social tensions in areas where conflicts occur. This creates challenges that will be experienced locally, regionally and internationally for generations.

In addition to the psychological effects, these conflicts have real, immediate, negative impacts on the economies and the political stability of countries worldwide. The cost to support approximately 50 million IDPs and refugees worldwide has risen 267% since 2008 to $128bn. Millions of people have been displaced as a result of the conflicts in Syria and Iraq with thousands more fleeing unstable regions each day. Refugees seek asylum and economic opportunities in Jordan, Turkey and the European Union while those countries struggle with the economic and social stresses associated with these large-scale migrations. Jordan has approximately 629,000 registered IDPs from Syria alone with estimates reaching over 1 million total IDPs from other regional conflicts.

Animosity towards refugees is growing in countries that boarder conflicts as well as within many Western countries. In the first quarter of 2015 Germany had the highest number of first-time applicants for asylum in Europe at 73,100 according to United Nations High Commission on Refugees. In response to the growing number of refugees, the Patriotic Europeans against the Islamization of the West (PEGIDA) movement held demonstrations against increasing immigration levels and what they see as the growing influence of Islam. At the same time, immigrants attempt to integrate into Western communities and societies where they feel marginalized and discriminated against. As distrust and resentment on both sides grows the fear narrative is strengthened, which leads to radicalization and creates a continuous cycle of insecurity. This cycle of insecurity creates deep fissures along religious and ethnic lines and builds both physical and psychological barriers within communities and societies.

Autocratic leaders have responded to growing conflicts by continuing to employ strategies to maintain their grip on power through a variety of repressive means. Meanwhile, democratic societies implement security measures that sometimes curtail individual rights and freedoms to safeguard against radical extremism. Political movements, activist networks and social groups seek greater representation—a voice in their future—and the benefits of globalization. Compounding these opposing forces are economic inequalities, social tensions, religious dogmas and ethnic discord that drive social unrest causing deep-seeded tensions to manifest into conflict. The forces that underpin conflicts are increasing in magnitude, becoming more frequent, and their impacts have significant, immediate and long-term consequences.

For decades the United Nations, World Bank, Governments, and NGOs have spent trillions of dollars on peace building initiatives and development projects to create stability in conflict and non-conflict environments. Their efforts typically focus on introducing some form of democracy, protecting human rights, delivering the benefits of globalization, and introducing free market economies to populations. These organizations typically implement large-scale, top-down programs, and direct funding through authoritative governments that are often viewed as illegitimate by the people they are intended to assist. The activities of these organizations have failed to stem the spread of violence, have not delivered enduring peace or stability to any region and have added to the cycle of insecurity.

The solution exists within the non-combatant populations in areas where conflicts occur. There has been a gradual shift by some organizations to support grass-roots initiatives that focus on delivering benefits to individuals and local communities. These programs counter top-down approaches that attempt to build government capacity in the hope that resources will trickle down to the population. This concept has also been adopted by militaries that employ counterinsurgency techniques. An example of this is the U.S. military’s efforts to recruit Sunni tribes in Iraq to fight against ISIS. This paradigm shift is based on the notion that to develop enduring stability, one must engender popular support. Unfortunately, these initiatives are the exception rather than the rule and have not been wholly embraced by organizations or integrated into their strategic plans and activities.

To realize the full potential of this paradigm shift, efforts must be undertaken to design and implement population-centric strategies to mitigate the negative impacts of conflict and break the cycle of insecurity. A population-centric strategy is a road map for governments, militaries and even private companies to apply in any geopolitical, socioeconomic or ethnocentric environment to shape the outcome of conflicts and ensure future stability. Adopting a population-centric strategy enables organizations to avoid growing tensions before they turn to conflict, break the cycle of insecurity, reverse the growing trends associated with today’s conflicts and most importantly saves lives and money.

From Theory to Strategy: Putting Population-Centric Approach to Action

A population-centric strategy centers around fulfilling people’s basic needs while addressing grievances related to governance, security and improved economic opportunity simultaneously. It begins by identifying the basic needs of individuals and communities as a critical first step that requires systematic examination. This process is often overlooked by most development organizations because identifying basic needs is complex and varies depending on physical and social conditions that include, but are not limited to: geography, infrastructure, and availability of natural resources. Moreover, basic needs are also influenced by a population’s cultural norms and world views, which are seldom understood or incorporated into planning of activities.

“We give families the basics they need to survive – food, clean water and shelter – we must also tackle the root causes of poverty and instability, in particular economic development.” UK International Development Secretary Justine Greening

Once the basic needs are identified, tailored development initiatives are planned to deliver goods and services to satisfy individual and community needs. Successful development initiatives are designed to provide an immediate impact, are sustainable and create linkages between communities, organizations and local governance bodies. Large scale development projects seldom satisfy the basic needs, take years to implement and create disparities among communities, tribes, and clans that can create resentment and distrust feeding the cycle of insecurity.

As of December 2014, the U.S. government alone had spent approximately $7.5 million per day on air strikes in Syria and Iraq against the Islamic State. Compared to military operations, large scale development projects, or humanitarian relief efforts, investments in small-scale development initiatives, designed to meet basic needs, are low-cost and provide a greater return on investment. An example of a successful tailored development initiative is a biomass fuel briquette project that delivers an alternative fuel source to communities in areas where deforestation is prevalent. The cost to start a biomass briquette system is around $1,500 and once the program is up and running it generates revenue for participants. However, the real value of the program is the stability it delivers to the community through employment for individuals, delivery of a needed commodity—an alternative fuel source for cooking and heating—and the direct linkages and dependencies it creates between the project’s owner, the community and the local government.

The next step is to identify existing formal and informal governance structures that support civil society and empower them through the delivery of goods and services that fulfill basic needs requirements. This requires “local” stakeholders, partners, or NGOs to facilitate the distribution of goods and services. A natural choice and logical partner are local police units. Local police units are familiar with the areas where they operate, are typically trusted by community members and have a mandate to “protect and serve.” At the same time, small investments in uniforms and equipment like radios enables them to better serve communities and effectively distribute resources. Additionally, empowering local police units avoids the pitfalls of training national military forces that cost millions and are often dissociated with the people.
With the appropriate stakeholders identified and in place, local distribution efforts and development initiatives are linked to regional and national efforts as part of the population-centric strategy. Programs and initiatives are supported by a comprehensive communications plan that disseminates targeted messages. Local networks and sources, regional and national news outlets, social media and international broadcasts illustrate the impact and benefits of the strategy. Doing so provides a direct counter to negative narratives such as “Islam is under attack from the West.” Moreover, it creates a “core narrative” and demonstrates through actions that free societies around the globe are there to help. Accompanying the messages should be a symbol or visual key that transcends race religion or ethnicity. Combined core narratives and symbols provide an effective way to shape perceptions and influence the outcomes of conflicts.

The contemporary situation is one of global chaos and yet the path to stability is simple and direct. Strategic Results will be accomplished with the tactical implementation of programs designed and implemented at the community level, with a regional approach that align with a national strategy. The key is to engage and collaborate with non-combatants on the ground in kinetic environments to create enclaves that are inhospitable to extremist elements.

With over 13% of worldwide GDP lost to conflicts, the global community needs a new, effective approach to resolve conflicts. While historically the level of conflict is low, there has been an upturn in recent years, and the trend does not seem to be near its end. With the increasingly easy and cheap access to communications tools, information such as news and propaganda, and access to dangerous material and weapons, the level of conflict could continue to rise. To achieve a more peaceful future, we need a new approach that focuses on populations, specifically on more effective strategies and approaches to engage the local communities and populations.