National-Level Implications of Protests and Instability: South Africa as a Case Study 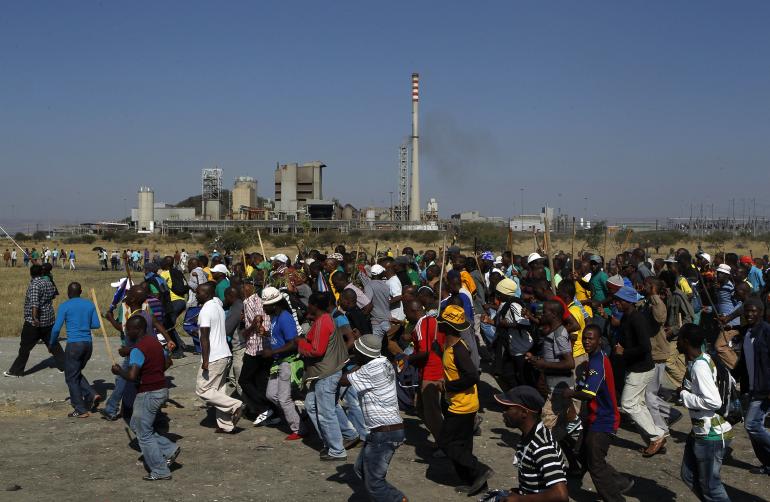 South Africa is the most developed country in Africa and the second largest economy after Nigeria. However, its economy has been severely hampered by ongoing labor disputes, specifically strikes in the mining sector. Earlier this year, South Africa suffered a devastating five month strike in the platinum sector, impacting around 70,000 workers. It was the longest and costliest mining strike in the country’s history, causing one of the biggest producers, Anglo American Platinum, to put two of its largest mines up for sale. Other producers have stated they are not planning on investing in future mines or are actively looking to sell a portion of their stakes in their mining operations.

The negative impact of strikes in the platinum mining and other unionized sectors are spilling over into other areas of the South African economy. Recently, Ford Motor Company and Toyota halted production at their Pretoria and Durban plants due to strikes by metalworkers causing a supply disruption for key components. Future labor strikes will further degrade confidence and reduce investment from domestic and foreign firms, which has a deleterious impact on the economy, especially in the long-term.

Labor protests and strikes are not new to South Africa, and are not always peaceful, as demonstrated by the tragedy in 2012 at the Marikana mine where 34 people died. Although there are numerous examples of less violent incidents, strikes in the mining sector are more prevalent and have caused operations to halt for various periods of time, negatively impacting production and revenue. In addition, there have been numerous protests focused on general social discontent, some directed toward the government and others at industry and business. The impact of these activities are already being felt and if the underlying causes behind the unrest are not addressed in the near future, the long-term effects on the South Africa economy and foreign investment into the country will be sizable.

South Africa has high-quality and extensive infrastructure along with a fairly large and efficient labor force, which is a significant advantages over its neighboring countries on the continent to facilitate growth and attract investment. Despite South Africa’s advantages, its economy has not been performing well and the rating agencies Fitch, Standard and Poor’s, and Moody’s all downgraded South Africa’s sovereign debt rating earlier this year – and reaffirmed it earlier this month. South Africa’s bond rating remains in the investment grade spectrum, but it is dangerously close to junk bond status, which would be catastrophic to the economy, making it extraordinarily difficult for the government to borrow money at non-usury rates. The rating agencies’ decisions were made in part due to the debilitating strikes and labor unrest that the country has experienced in recent years. South Africa’s economy grew by 1.4% in the third quarter of 2014 after declining by 0.6% in the first and growing only 0.5% in the second quarter. The increased growth in the third quarter bodes well for preventing an imminent future downgrade, but the economy remains weak and the outlook for 2015 is uncertain.

South Africa is a dynamic economy compared to the rest of the continent, but a real risk of stagnation remains and many business executives have a negative outlook and are reducing or halting investment. The mining sector is a significant portion of the South African economy – minerals account for 60% of export revenue. The protests and disputes directed at mining companies and the government may individually seem small, but the cumulative impact is having dire consequences. Labor disputes, strikes, and protests can all be limited with an improved working relationship between mining executives, miners, union leaders, and government officials. Many mining companies have not done a good job at understanding the opposing interests and the dynamics at play among all parties. A better understanding and new types of engagement could prove helpful for companies, which would in turn help the South African economy. Protests and instability are many times not only one company’s problem or one local government’s problem – they can and frequently do have national-level ramifications.